Staff has proposed an amendment to the Imagine Austin Comprehensive Plan that states Guadalupe St. from 29th to 51st should be designated an “activity corridor”. In addition to zoning, traffic (multi-modal), & density impacts, this designation would allow some homeowners within a certain distance of the activity corridor to build an ADU - an exemption from the HPNCCD: http://austin.siretechnologies.com/sirepub/agdocs.aspx?doctype=agenda&itemid=62541

Significance: Denial of this amendment could impact CodeNEXT implementation in this area (& similar corridors).

For more background of the topic, City Staff within the Planning & Zoning Department would like to expand the designation of “Activity Corridor” to the stretch of Guadalupe between 29th & 51st according to the Imagine Austin Annual Report Amendments filed back in July. City Council will be taking up the issue on Oct 6. See the amendment request CPA-2016-0003 here.

The lower limit of this amended path, 29th St., is where the existing “Regional Center” of Downtown/UT has it’s Northern-most bound. And the upper limit of this path is 51st St where the corridor would merge with the already existing corridor along N Lamar. (see a map here)

Officially defining this path of the map as an Activity Corridor would more fully connect the identified areas of high throughput of North Lamar which runs North/South and 51st and 53rd which runs East/West.

The definitions of an Activity Corridor can be found in the current Imagine Austin plan in the Growth Concept Map Definitions section:

Activity corridors have a dual nature. They are the connections that link activity centers and other key destinations to one another and allow people to travel throughout the city and region by bicycle, transit, or automobile. Corridors are also characterized by a variety of activities and types of buildings located along the roadway — shopping, restaurants and cafés, parks, schools, single-family houses, offices. Along many corridors, there will be both large and small redevelopment sites. These redevelopment opportunities may be continuous along stretches of the corridor. There may also be a series of small neighborhood centers, connected by the roadway. Other corridors may have fewer redevelopment opportunities, but already have a mixture of uses, and could provide critical transportation connections. As a corridor evolves, sites that do not redevelop may transition from one use to another, such as a service station becoming a restaurant or a large retail space being divided into several storefronts. To improve mobility along an activity corridor, new and redevelopment should reduce per capita car use and increase walking, bicycling, and transit use. Intensity of land use should correspond to the availability of quality transit, public space, and walkable destinations. Site design should use building arrangement and open space to reduce walking distance to transit and destinations, achieve safety and comfort, and draw people outdoors.

@tommyates I edited the title of this post to reflect the new date that Council will be taking up this item. Would you mind making the same changes to the body of your original post so that we can continue the conversation in this same thread with updated information?

Below is the latest email that Friends of Hyde Park sent to the city council.

A Guadalupe activity corridor would also align with the bylaws and goals of Friends of Hyde Park:

In a recent vote of the Friends of Hyde Park membership, 88 Hyde Park residents voted out of our 296 members, 73% of the voters voted to support and encourage the responsible development of the Austin State Hospital site in keeping with the urban core with housing of all types (including “Missing Middle” housing - carriage houses, triplexes, fourplexes, townhouses, small apartments, as well as Vertical Mixed Use buildings). With the possible redevelopment of the Austin State Hospital in the near future the designation would allow for more much needed housing along one of the last undeveloped tracts in central Austin. For more information on our membership’s vote on the Austin State Hospital please visit http://friendsofhydepark.atxfriends.org/record-of-votes/.

Please consider supporting this change that will benefit our neighborhood and its residents. This statement is the opinion of the Friends of Hyde Park board, made due to its alignment to our bylaws, goals, and previous membership votes.

So for further color on the issue I’ve hunted down the video where Planning Commission discussed this Imagine Austin plan amendment. I uploaded it to Youtube so that if you want to watch it and also use the Chrome browser, you can do so at an increased speed. The total watch time for this segment at regular speed is 39 minutes: https://youtu.be/kNSx5mWGPdU

I’ve also taken notes on the segment below:

In this Planning Commission (PC) meeting, a group of amendments to the Imagine Austin (IA) Comprehensive Plan (Comp Plan) as part of the annual update process were considered before being sent to City Council.

Matthew Dugan (CoA Planning & Zoning) started off asking for clarification if notification requirements are the same for Comp Plan amendments as they are for city-wide code amendments (which require notification of all N’hood groups) so he would know how to proceed after the PC voted.

All amendments were previously identified by City staff as part of their annual review of IA, then went through the Comprehensive Plan Joint Committee where the recommendations were fleshed out into official language.

When voting on the whole batch, all other amendments were accepted and sent to Council with the recommendation of PC. Add’l language was included at the behest of Commissioner Zaragoza asking that City Staff reexamine areas on the periphery of the Growth Concept Map (this visually shows the Comp Plan on a map) which aren’t currently designated as Corridors/Centers, with an emphasis on West of Mopac where no such designations exist. This lack of corridors in West Austin is considered an oversight in the original Comp Plan process.

Dugan believed that such an update would necessitate a more rigorous procedure than a simple Commission recommendation, and should happen in the 5 year Comp Plan update. Commish Shieh asked why West Austin was overlooked at all, whether it was purposeful, or whether it was left off because metrics at the time didn’t warrant the designation. Commish Zaragoza noted that the map was glaringly unjust in the present day, and asked that this review of West Austin at least happen as a precursor to the 5-year update to the Comp Plan (eta: Spring 2017) so that community discussion can begin early.

Public Hearing on Amendments (All comments provided were solely directed at the designation of Activity Corridor to Gaudalupe):

Here’s an Austin Monitor article that goes into detail about this. The update received a 5-3-1 vote from the Planning Commission.

"Commissioner Chito Vela said he had gotten 30 to 40 letters about the matter, most of them in support of the amendments. He did note that when the change to Guadalupe Street was discussed in committee, there were people who opposed it, mainly over concerns that it would allow accessory dwelling units to be built.

Here are is what Appendix A-30 in the Imagine Austin plan states as the criteria for identifying corridors.

Land availability: Areas with vacant land or land identified for redevelopment by neighborhood plans (generally, but not exclusively, calling for mixed-use future land use catagories).

I think it might help if our membership takes a position on the issue also since this could have a big impact on future housing opportunities in central Austin. I’ve included a draft resolution below, if anyone has any suggestions, comments, or anything else and if we want to vote on this. We need to have a vote soon on our bylaws update (:FAN: FAN Bylaw Changes) and it’d be great to have something like this to vote on also at the same time anyways.

Friends of Austin Neighborhoods (FAN) supports the staff recommendation to designate Guadalupe Street from 29th Street to 51st Street as an activity corridor. Residents of neighborhoods along Guadalupe St. deserve greater access to jobs and walkable amenities, including restaurants, grocery stores, and small businesses, as well as much-needed housing near the urban core.

By further reducing the current restrictive parking requirements, this designation would allow more homeowners within a quarter mile of the activity corridor to build accessory dwellings. FAN members support reducing the restrictions on accessory dwelling units as a way of welcoming new residents and the abundant and diverse supply of housing needed to accommodate them.

With the possible redevelopment of the Austin State Hospital in the near future, the Guadalupe activity corridor designation would allow for additional housing alongside one of the last undeveloped tracts in central Austin.

The characteristics of Guadalupe between 29th and 51st Streets align well with the criteria in Appendix A-30 of the Imagine Austin Plan for identifying activity corridors:

Land availability: Areas with vacant land or land identified for redevelopment by neighborhood plans (generally, but not exclusively, calling for mixed-use future land use categories).

This recommendation has gone through the full process from being identified by city staff as part of their 2016 Annual Report for Imagine Austin Comprehensive Plan and amendments, then to the Comprehensive Plan Joint Committee, to the Planning Commission Subcommittee, to the full Planning Commission, and now to the City Council for consideration. Ample time and notification to neighborhood residents has been provided for this update to the Imagine Austin Plan, including a postponement at the City Council for further consideration. We urge the City Council to approve this important designation.

@alyshalynn great notes. I don’t understand why designating Guadalupe as an activity corridor should be contingent on designating activity corridors west of MoPac. This seems like a political stab at Gallo to me, since she is generally supportive of adding density in the urban core

In this video Commissioner Rojas asks that Comprehensive Plan Amendments to Imagine Austin for 2016 be put on the Zoning & Platting Commission’s next Agenda for September 20.

Unless there are any other suggested changes, I’d like to hopefully get the vote started on this this weekend so NAs have plenty of time to weigh in and there’s also plenty of time before it comes to council.

This is also going before the Zoning and Platting Commission on Sept 20, 2016. If everyone could send their emails to this commission also, that would really help. If you sent something to the city council or Planning Commission already, copying and pasting that email would be perfect.

I’ve included the emails for the Zoning and Platting Commission below.

Does anyone know what happened at the Zoning and Platting Commission yesterday regarding the Guadalupe activity corridor?

Take 5 Seconds to send a 1-click email to the city council to support improving Guadalupe Street from 29th Street to 51st Street. Many areas along this stretch of Guadalupe Street lack walkable amenities or businesses that neighbors or Austinites can use and enjoy. Designating this stretch of Guadalupe Street as an activity corridor will allow more walkable amenities, including restaurants, grocery stores, and small businesses that provide jobs to local residents, as well as creating much-needed housing near the urban core. Allowing more housing will help address Austin’s severe housing shortage that’s driving up rents for renters and property taxes for homeowners. The city council will make this decision at their meeting on October 6th. Every email matters! 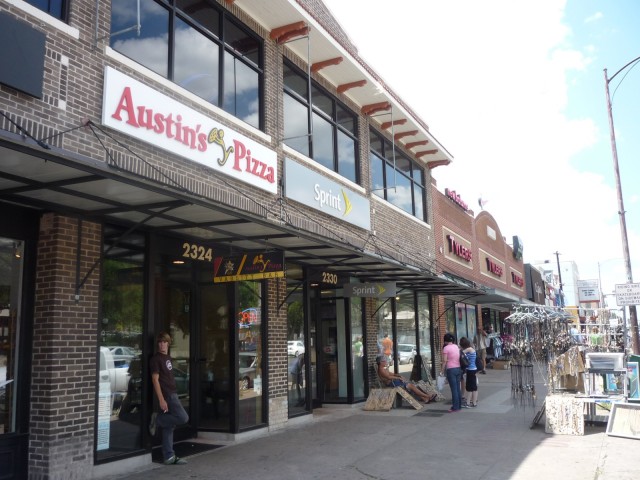 Read the resolution that FAN just passed about this here: http://www.atxfriends.org/votes/

Come on everyone! I know we can get some more emails sent. =)